These are not your conventional type of fairy. 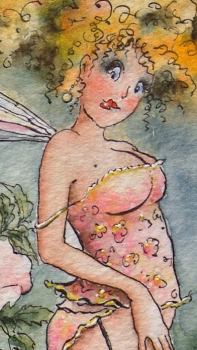 When I first discovered them, they were a bit of a tongue in cheek rally against our airbrushed society. They are real fairies you can believe in. Natural beauties as nature intended! Totally unconcerned with their honest imperfections, like a little superfluous hair, a little extra weight...and ageism is an anathema to them. In fact, the older the better! Anyone with a smile and and open mind is welcome to join them in their Wanton Fairy garden.

Since then, the world has turned upside down for us all, and I think, quite a lot of people (including myself), have become slightly feral, embracing nature.. and feel all the better for it. Covid has helped us all realise just what is important in life.

My fairies have been subconsciously in gestation for many years, just waiting for the right moment to truly blossom. I have always felt a deep connection with nature. Combine this with the experience of living with a very old grandmother, who owned an extensive collection of corsets, and you can begin to see the picture. Born in 1884, she was a true victorian, surviving TB, eleven children, two world wars and many hardships, with humour and storytelling. She swore by her boned corsets, for maintaining an excellent figure and good posture. I would help her into these pink corsets on a morning, lacing the back and pulling into shape..so painting corsets onto fairies, did not seem unnatural. 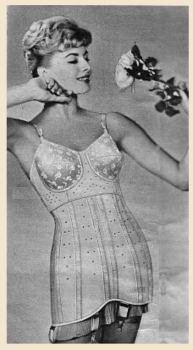 (Image right: not my grandma, but you get the idea)

The house I lived in was far older than my grandmother and came with a resident ghost, which to my dismay, shared my attic bedroom. Not unreasonably, I therefore spent as much time as possible, in the garden. It was a wonderful garden, enclosed by a high brick wall, and despite our docile cat, full of wildlife... butterflies, bees, birds and a robin called George, that fed from my hand.

Of course, fairies were never far from my imagination. The world of fey surrounded me.

Fast forward now, decades later, to an Autumn afternoon on my allotment in Surrey. Here I observed nature through the seasons, as well as relishing the abundant bonus of organic produce for my family and friends. It was also an invaluable source of inspiration for my art in all forms and many of the Wanton Fairies, have been observed and sketched in this special place. 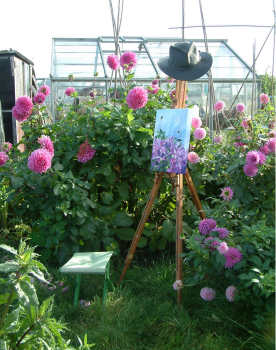 The idea first germinated there, after a vigorous weeding session. I sat down for a breather and sent a text to a friend along the lines of: “I’ve just seen a lavender fairy, wearing a black silk thong, disappear into the rhubarb patch.” The text met with great encouragement to spot more. From then on fairies came thick and fast. I just could not stop sketching and painting fast enough. My life was hectic and full, so much of the sketching went on during my daily commute on South West trains to London. 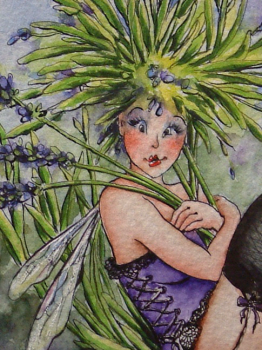 As a child, I was, (and still am), inspired by the works of Ronald Searle and Arthur Rackham, spending hours studying their genius use of pen and wash. Two such different artists, yet with the same extraordinarily powerful ability to work the paper and draw the onlooker into another realm. My bookcase also held a set of Cicely Mary Barker’s ‘Flower Fairies’, which I loved, but never quite so much as the wild humour of Searle and the sinister enchantment of Rackham. So Wanton Fairies appears to have been fused from all of the above, with my grandmothers corsets thrown in as the catalyst. I’d like to think Searle and Rackham would have liked them, but I’m not quite so sure about Cicely Mary Barker!
I’m told there is an Edwardian, music-hall, peep- show charm about my Wanton Fairies. They are good-naturedly saucy..(a few, more than others!) As my collection has grown, the fairies have amassed quite a few ancient luminaries amongst their fans. Indeed my oldest fan, until recently, was a 93 yr old spitfire pilot, in whose tree, I spotted and painted my first Wanton Fairy ‘Crabapple’.
He was ever so chuffed and had the entire ‘Wanton Fairy’ collection in his living room. 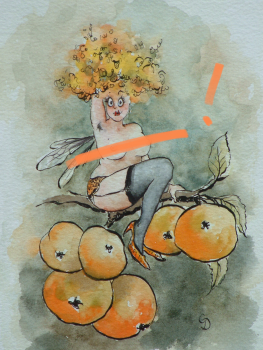 On a final note. It is interesting to observe that the 19th century saw the sustained ascendence of fairy stories and the illustrations of Arthur Rackham and Edmund Dulac for example, epitomise the genre of that by-gone era. In the 20th century, the ‘Cottingly Fairies’ were ‘photographed’ in 1918 by two young girls, causing quite a stir and convincing many well known people of the time, including Sir Arthur Conan Doyle, (author of Sherlock Holmes), of their existence. 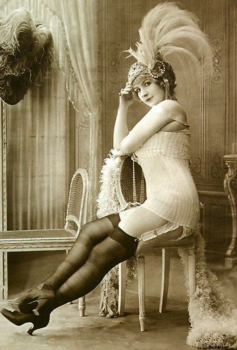 England at the time was devastated by the Great War and ravaged by the Spanish Flu. People craved inspiration beyond the government presiding over these terrible events.

A troubled and uncertain outlook is with us again and beckons once more a communication with nature.

The age of the Wanton Fairy is upon us!

Now that you are aware of the existence of these delightful creatures. Do please let us know if you spot any in your garden, woods and wild places! The concise library of our 33 greetings cards, should aid your identification.